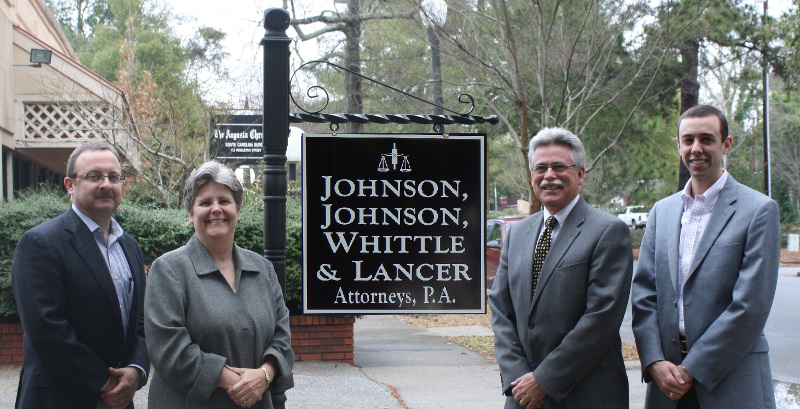 B. Henderson Johnson, Jr. and his oldest son, Barry H. Johnson, founded the Law Firm of Johnson and Johnson in 1980 as a general practice law firm. Henderson had a strong concentration in criminal defense, and Barry focused his practice in  civil litigation.

In 1982, James E. Whittle, Jr. joined the firm and brought with him a background and focus in criminal defense work.

The firm expanded further in 1982, when Vicki Johnson Snelgrove joined the firm. She exclusively practiced family law, including divorces, custody, visitation and adoption. On July 1, 2010, she left the firm and is serving as a Family Court Judge for the Second Judicial Circuit.

The variety of offered services was increased in 1989, when Paige Weeks Johnson became a partner in the firm with a concentration in the areas of real estate law, family law and probate law. She also is a certified Family Court Mediator.

Todd J. Johnson became a partner in the law firm in 1992, and has developed a practice in the areas of personal injury, wrongful death, work related accidents, social security and other civil litigation.

In 2008, the firm welcomed Brett H. Lancer. Mr. Lancer earned his Bachelor of Arts degree in Criminal Justice from The Citadel in 2005. He earned his Juris Doctorate from Charleston School of Law in 2008. During his academic tenure, Mr. Lancer received the Joseph D. Aiken Award for outstanding academic achievement in Criminal Justice from The Citadel and the Pro Bono Award for excellence in community service from Charleston School of Law. He also served as the President of the National Criminal Justice Honor Society during his years at The Citadel.

Mr. Lancer was admitted to the South Carolina Bar in 2008. His areas of legal focus include criminal defense, personal injury, death cases, work related accidents and other civil litigation. Brett became a partner in the firm in 2013.